Ranked in the top tier by leading independent guides to the profession, the Walker Morris Sports Team is one of the few Firms in the UK that can offer the complete sports law service. We have experience in representing both boxers and promoters in connection with a variety of agreements, such as manager agreements, trainer agreements, promotion agreements, fight agreements and sponsorship / endorsement / appearance agreements. The Team also has experience in providing personal advice to boxers as well as advising on all manner of disputes both inside and outside of the ring.

In this piece, we look at the historic, upcoming Katie Taylor and Amanda Serrano undisputed lightweight championship bout at Madison Square Garden and the state of women’s boxing. 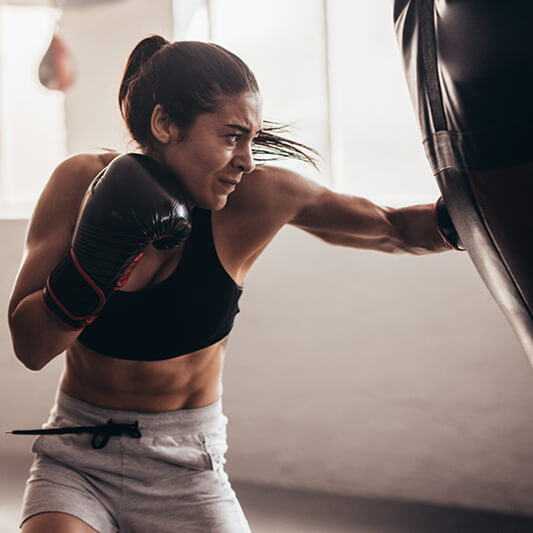 The British women’s boxing scene has come a long way since it first became legal in England in 1996 (following a 116-year ban) and the British Boxing Board of Control’s refusal to grant Jane Couch a professional licence.

Women’s pre-menstrual syndrome makes them “too unstable to box”.

Defence given by the BBBC for its refusal to grant a professional boxing licence to Jane Couch.

24 years after the British Boxing Board of Control’s infamous statement about why women’s professional boxing should not be permitted, two female boxers will headline Madison Square Garden, the venue still referred to by boxing purists as the mecca of boxing.

The World’s Most Famous Arena will see Katie Taylor and Amanda Serrano’s bout be the first all-female clash to top its billing in its 140-year history.

Taylor, the undisputed lightweight champion, is set to defend all her titles against Serrano, a seven-weight world champion. Taylor currently holds the WBA, WBC, IBF and WBO lightweight titles and will be putting all of those titles on the line in a ten round bout at the iconic New York venue on Saturday 30 April 2022.

Taylor is the No.1 ranked pound-for-pound fighter in the world by Ring Magazine, an American boxing magazine first published in 1922, while Serrano is ranked No.3. The bout at Madison Square Garden is set to be a career-defining night for both boxers as their chance to be the undisputed champion of the world hangs in the balance. The fight will also provide each fighter with their biggest ever pay-day, with each set to receive a guaranteed seven-figure sum.

Nicknamed ‘KT’, Taylor is a legendary figure in women’s boxing and has an impressive fight record of 20 wins (including six knockouts) and no losses. Meanwhile, Serrano (‘The Real Deal’) is looking to cement her own legacy and boasts an equally impressive record of 42 wins (including 30 knockouts), one draw and with just one defeat back in 2012.

Taylor will hope that this bout ends in the same fashion as when she battled Serrano’s sister, Cindy Serrano, back in 2018. Taylor successfully defended her IBF and WBA titles against Cindy Serrano, winning by unanimous decision, with scores of 100-90 displayed on all of the judges’ cards.

The evening will also feature some quality fighters on the undercard including a clash between American Jessie Vargas and Briton Liam Smith and the second professional fight of British Olympic gold medallist Galal Yafai. Interestingly, Vargas will be training alongside running his political campaign to represent Nevada’s 4th Congressional District.

Taylor began boxing at the age of 12 and at the age of 15 fought the first officially sanctioned female bout in Ireland, where she was victorious. Before turning professional in 2016, Taylor won gold in the 2012 Summer Olympic Games held in London and was also a five-time World Champion and a six-time European Champion. After turning professional, Taylor quickly progressed to be WBA, IBF and WBO Lightweight Champion in just three years. In 2019, her controversial points victory over Delfine Persoon, saw her become one of only eight boxers (male or female) in history to hold all four major world titles simultaneously, that is the WBA, WBC, IBF and WBO lightweight titles.

Serrano’s rise through a sport that she started at the age of 17 has seen her eclipse Guinness World Records for her endeavours on the canvas. Serrano has held nine major world titles across seven different weight classes which range from super flyweight all the way up to light welterweight. Serrano is the younger sister of Cindy Serrano, former WBO Featherweight Champion. In 2016, they became the first sisters to hold titles from major sanctioning bodies at the same time.

Women’s boxing then, now and in the future

Until relatively recently, women’s boxing was illegal throughout much of the world. It was only in 1988 that the first country lifted the ban on women’s amateur boxing, Sweden. This was followed by the US in 1993 and the UK in 1996. However, in the UK, women were not able to obtain a professional licence to box until the famed 1998 case of Couch v British Boxing Board of Control, where the Court found that the Board’s refusal to grant a professional licence amounted to unlawful discrimination on the grounds of sex. Despite the progression made in the 1990s, female fighters had to wait until 2012 to be able to box competitively at an Olympic Games; by comparison, men have been able to box at the Olympics since 1904.

Since the London Olympics, public interest around women’s boxing has risen sharply and it has seen many jaw-shattering spectacles. As the interest has grown, so too has the take-home pay from some of the more prominent bouts. Taylor earned £79,000 in her bout against Cindy Serrano in 2018, but recently earned £1 million after her bout against Natasha Jonas last year, which also saw Jonas take home £350,000. Claressa Shields, the fighter ranked No.2 by Ring Magazine in the pound for pound rankings, also recently penned a seven-figure contract with British professional boxing promotional company BOXXER. While these are impressive sums and show the commercial interest extended to women’s boxing, these figures are still dwarfed by the size of the deals that the top male fighters receive. For example, Saul ‘Canelo’ Alvarez’s latest deal with DAZN is worth around $400 million over an 11-fight contract.

As women’s boxing continues to gain more global recognition for the content it produces, and the financial rewards on offer continue to grow, so too will the pool of talent and level of competition in the sport. Evidence of this is already starting to appear.

Another women’s super-fight is set to take place later this summer when Savannah Marshall takes on two-time Olympic champion Claressa Shields for the right to be named the undisputed middleweight champion. The rivalry between Marshall and Shields spans back over a decade, with Marshall the only fighter to have beaten Shields inside the ring (at the 2012 AIBA Women’s World Boxing Championships).

While the swift growth of women’s boxing is welcomed, there is still progress to be made so that these talented and dedicated athletes reap their just rewards for the risks they take in entering the ring. It is hoped that two super-fights between such high profile female fighters occurring so close together will help provide another boost to this thriving sport.

Ranked in the top tier by leading independent guides to the profession, the Walker Morris Sports Team is one of the few Firms in the UK that can offer the complete sports law service. We have experience in representing both boxers and promoters in connection with a variety of agreements, such as manager agreements, trainer agreements, promotion agreements, fight agreements and sponsorship / endorsement / appearance agreements. The Team also has experience in providing personal advice to boxers as well as advising on all manner of disputes both inside and outside of the ring.