Globally, the production of plastic has risen overwhelmingly over the past 70 years with 1.5 million tonnes of plastic being produced in 1950 to 300 million tonnes today. It is an inevitability that with such mass production of a non-biodegradable material that there will be a similarly vast impact on the environment. If the current trend continues it is estimated that across all sectors 12,000 megatonnes (12 billion tonnes) of plastic waste will make its way into landfill or the natural environment by 2050.

In 2017, the UK alone produced 1.85 million tonnes of plastic which was used in the production of plastic packaging. In light of this, and the fact that a reported 72% of soft drinks are packaged in plastic, it is easy to see why there are such strong social, governmental and political pressures on stakeholders in the soft drinks industry and other sectors within food and drink where plastic packaging is widely exploited.

Both the Government’s concern and aspiration to change the way in which the industry approaches its obligations towards reducing the use of non-biodegradable packaging can be seen through the implementation of a number of governmental regimes including the Resources and Waste Strategy. The Strategy aims to invoke the ‘polluter pays’ principle and increase producer responsibility for packaging, ensuring that producers are on the hook for the full costs of disposal for any packaging they place on the market.

In April 2018, signatories from 42 businesses who are collectively responsible for more than 80% of the plastic packaging on products sold in UK supermarkets, signed up to a new programme, the UK Plastics Pact, tackling the use of unnecessary single-use plastic packaging. Current signatories include Coca Cola European Partners, Lucozade Ribena Suntory, Arla and Highland Spring Group. There has been a spate of negative publicity centred on other industry leaders following their decision not to sign up to the scheme. This criticism reflects what now appears to be the general societal outlook in regard to businesses’ approach to their environmental responsibilities and plastics in particular (the Blue Planet effect).

Actions from a supply chain perspective

A report by the University of Cambridge Institute for Sustainability Leadership, commissioned by an industry-led working group including high profile members such as Lucozade Ribena Suntory and Harrogate Water Brands, highlights a number of workable actions designed to eliminate plastic packaging waste (the Report). The Report and a number of other working papers suggest that the principal forms of necessary change fall into three broad categories:

Research and development will play a significant role in transforming the way in which companies both think about and produce their packaging. The Report includes a number of aims which companies should be striving for in their approach to reducing the amount of plastic used in drinks packaging. These aims include undertaking comprehensive research in order to investigate the optimal material for drinks packaging that eliminates plastic waste whilst ensuring the lowest net environmental impact.

This approach is already apparent amongst the industry leaders including Lucozade Ribena Suntory and Carlsberg. LRS’ Lucozade Sport brand has pioneered the use of seaweed based edible packaging for both sports drinks and energy gels at marathon events. The packaging can either be consumed by the user or discarded, in which case the product will decompose in the same manner and timeframe as a piece of fruit would.

Carlsberg have recently brought their “snap pack” beer can product to market. The product, which aims to tackle the traditional six ring can binding, essentially offers a transparent glue which bonds the cans. This product alone could potentially cut the Carlsberg Group’s plastic usage by more than 1,200 tonnes each year once a rollout across each of its 11 markets takes place.

In December 2018, the UK Government allocated £60m to supporting a scheme which aims to transform waste into environmentally friendly plastic packaging through technological solutions. This has bolstered the Government’s commitment to the cause having previously invested £140m over the last 3 years in developing sustainable packaging.

The investment is subject to industry entering into partnership with the Government and providing significant co-investment. In line with this, industry heavyweight Nestlé has recently pledged to work towards a “waste-free future”. They have heavily invested in innovation and alternative packaging which has put them in a position to roll out 100% paper packaging for Nesquik in Q2 of 2019 and similarly paper based pouches for the Milo drink brand in 2020. Furthermore, by 2025 Nestlé Waters intends to increase the amount of recycled PET (Polyethylene terephthalate) content in its bottles to 50% for its European brands which includes, Acqua Panna, Buxton, S. Pellegrino and Levissima.

Other examples of collective action include entry into the the UK Plastics Pact (the Pact) mentioned above. The Pact sets out four targets which signatories should aim to achieve by 2025. The targets are: 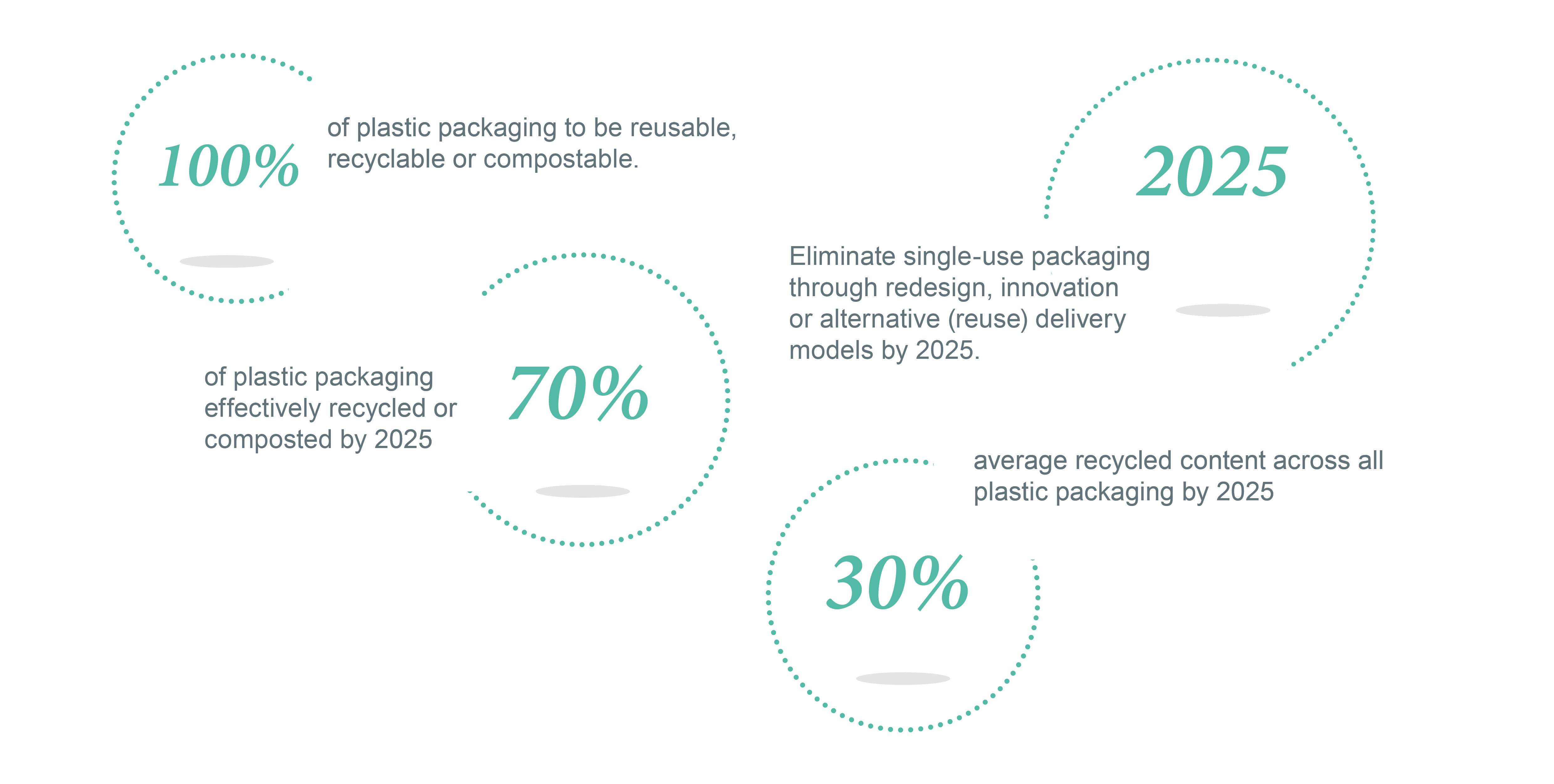 On a more local level, the recent #leedsbyexample scheme in the city of Leeds is a good example of the industry coming together to address plastic packaging. Under the scheme, environmental charity Hubbub and recycling compliance scheme Ecosurety developed a unique partnership with all levels of the soft drinks supply chain – including drinks companies like Lucozade Ribena Suntory, Coca-Cola GB, Pepsico and Highland Spring, retailers like Asda and Marks and Spencer, and packaging manufacturers like Ball Packaging and Klöckner Pentaplast. Using a combination of technology, recycling facilities, and communications engagement the scheme is aimed at encouraging the recycling of “food to go” packaging by millennials, who have surprisingly low current rates of recycling.

The Report acknowledges that potential, alternative delivery systems will not suit every company, or, more specifically, every product in the sector. For example, bottle refilling, which has been touted as one method of increasing the sustainability of packaging, still needs further and sustained assessment. For example, legally, spring water must be bottled at source in order to be advertised as such, whilst some carbonated drinks cannot be made using syrup, an issue which current drinks dispensing machines are unable to reconcile.

Although it will not be an easy challenge to overcome this issue, companies need to invest significant time and effort into considering new and innovative ways in which they can bring their products to market in a way that utilises plastics already in circulation.

There is an unquestionable global movement aimed at highlighting and addressing the environmental impacts of plastics. This movement has catalysed a number of far reaching programmes aimed at reducing the use and improving the recyclability of single-use plastics.

As environmental and potential health impacts are further understood, both consumer and regulatory attitudes towards the overuse of plastic packaging are becoming increasingly forceful, which has resulted in industry leaders reassessing their approach to the use of plastics. Of course, as mentioned, in many instances plastic packaging may still be the most viable option until a true workable alternative is available. In any event, in the short and medium term, every effort should be made to move towards a more circular economy aimed at extending the life, reuse, remanufacturing and recycling of plastic packaging. The innovative approaches already initiated by the industry and supply chains shows that progress is possible.